As I said last week, I am open to change in my life. I am going to start by working fewer hours as an attorney and expect this may open doors to new activities and people. After just one week, it’s still too early to report to you authoritatively, but I am feeling good about this decision. However, check back with me. It is entirely possible I will conclude that my very recent and complete dedication to work was a fine lifestyle for me, thank you.

I must admit the prospect of doing other things in lieu of working full time is an itch I might have to scratch. I feel a sense of excitement for my future. The challenge to fitting together the remaining parts or pieces of one’s puzzle is there is no handy picture to use as a reference. And I say thank goodness. Life’s mystery ought to be enough to keep things interesting and unpredictable right to the end.

Consistent with taking a step back professionally, I returned to Deer Tick Manor this past Friday to open the house.  While Lee was alive our agreement was that we did not need television or internet service at Deer Tick, the better to enjoy the morning songs of the birds, the whisper of wind through the leaves on a lazy summer afternoon, the eerie pale light cast on the field by a bright full moon as it emerges from a silvery cloud, the strobe of thousands of fireflies frantically seeking mates that happens each June and July. Ironically, one of my tasks this weekend was to greet a Comcast tech, who connects me with efficient, high speed internet service, so I can spend more time at Deer Tick while I produce less work.

I take in the place with my eyes for the first time since the start of meteorological winter. I see that Jeff, who has been Lee’s guy since they met at the large garden center where he is employed, has the property looking fit and in fighting trim. The tall grasses and large plants occupying “Totie Fields” have been cut low, mulched, and are ready for the new growing season. 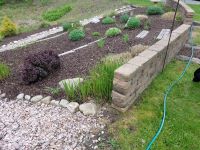 A young redbud tree that the Arbor Day people had mailed to Lee in an envelope is a healthy pink. Jeff, or Jeff’s dad, or Jeff’s son, Brandon, or perhaps Jimmy, who is Jeff’s cousin, has power-washed the garage, and it shows. Two apple trees, just saplings really, planted last fall occupy the spots where the original trees helped feed several generations of deer. When those trees rotted from the inside and died, the deer departed. I wish the new apple trees luck and hope one day to see there are deer feasting on their apples and resting the night in my field.

Of course, Lola is here, too, and a fine companion, indeed.  As the Midwest weather slowly improves in fits and starts, I take every opportunity while I am here to teach Lola to heel, to stay or to come on command. I reinforce Lola’s compliant behaviors with a combination of hearty praise and treats. She happily would eat an entire bag of treats if I permitted it, which I don’t, but I can see that she understands the concepts. However, sometimes Lola will look at me but, instead of coming when I call, she turns heel and scampers down the lane, bounding off in the opposite direction. I must fetch her home.

Usually, she will be found on the property of my elderly neighbors, Bess and Pete. And there here she is, puppy adorable, with mouth agape, her large pink tongue protruding from behind a set of large, white teeth. Sometimes she almost seems to be smiling. Lola works Bess and Pete for treats. This time Pete gives her the same rubber mallard he gave to his own dog many years ago when she was about Lola’s current age. Generally, Lola is running amok in Bess’s attractive nuisance of a garden.

Bess’s garden is a place where gnomes, formerly bright red cardinals, whose paint over time has faded to pink, sea gulls, frogs, rabbits, assorted squirrels of varying size, and several giant metal butterflies live together in apparent perfect harmony. There are numerous landscape features: a pathway made up of hundreds of small, smooth stones leading no place; another section that apparently is dedicated as a storage site for large rocks. The garden includes several small water features and a miniature foot bridge that is sorely in need of its own troll.

Among the dense patches of peonies, hydrangeas, dahlias, daffodils, tulips, lilacs and coneflowers, the placement of these objects and features seems entirely happenstance. Despite all the magical creatures, the overall impression this garden makes upon me is far from magical; I would not even say it functions as clever kitsch.  Fortunately, Lola does not need to be impressed as she frolics happily amidst the clutter.

Despite my sense that we had nothing in common with any of our neighbors, Lee dutifully had interacted with them, and, quite naturally had positive things to report back to me. I occasionally would tag along during her visits, engage in a bit of small talk until I was able to fashion a plausible reason to excuse myself. More often I would simply wave from a respectful distance.

Even being so removed, I had heard the rumor that Bess was ill and that she used a doctor who over-prescribed, which accounted for her lack of engagement and sometimes odd behavior. I also had heard the one that Pete was a jerk or a curmudgeon, and that his negative attitudes had infected his wife. But the Bess I had been speaking with this day showed not the slightest sign of illness. And she could not have been kinder or more engaged as she spoke to me about Lee. She wanted to show me a plant in a pot that she keeps in the garden in Lee’s memory. And Bess, who is very knowledgeable about gardening and knows from Lee that I am not, offered me practical and friendly advice.

As for Joe, he certainly can be gruff and opinionated, but I found he is well informed, has a good sense of humor and appears to have a generous heart. I notice he works the garden most days. Bess says he doesn’t enjoy the activity like she does. I suspect Pete gardens because he loves Bess very much and it’s a way for them to be together. Pete also turns out to be a softy or a sucker where puppies are concerned. When Lola jumps or stands on her hind legs and leans her full sixty pounds into him, he laughs and gives her another treat. Bess confides that Pete wants to get another dog when their dog goes, which she thinks will happen soon. Bess frets they are too old, and it will be unfair to a new dog.

Eventually I leash Lola and lead her back to our place before she gets into more mischief. I did not come to Deer Tick in order get to know my neighbors better. Yet, as we walk among the trees and down the lane, I am thinking that I should try being a less judgmental in the future. It might prove to be a positive change.