It would feel weird for me to write on this day and not write about this, or not acknowledge this today.

Obviously, that day was life-altering for everyone, and for some, more than others. If you are reading this today, and someone you loved died on that day, please feel free to leave their name and a bit of their story in the comments, so that we can honor and acknowledge your loss, and their life. And, as my good friend Tanya – who lost her firefighter fiance Sergio on 9/11 – says often: “Hold your sorrow gently.”

The impacts of 9/11 are layered for me. I was living just outside NYC at that time; in New Jersey, and I was on my way to work out on Long Island. The first plane hit the first tower while I was on the local bus that went from New Jersey into Manhattan. I didnt really understand what was going on, because we got dropped off at a different part of the city than where Ground Zero was, so it was mass confusion and people trying to figure out what was happening, minutes after it happened. The second plane hit the second tower while I was on the commuter rail train out to Long Island from the city. Once I got to the University campus where I was an Adjunct Professor, a large projector screen had been set up in the campus library and about 50 or so students were gathered standing and sitting, just watching it all unfold. Minutes after I arrived, we all watched live on the screen in front of us as the first tower crumbled and fell to the ground, and then the second. Cell phones stopped working, there was one landline on campus and a line of students and staff , all waiting anxiously to use the phone and call family to tell them they were alive. At some point, I was able to call my parents and let them know I was alive. My good friend Marina was also teaching there at the time, and her in-laws lived out on Long Island, so they took us both into their home for a couple nights after 9/11 because all entrances into Manhattan were closed off.

At the time, I had been talking with this guy Don Shepherd that I had met in an AOL Music Chat Trivia Room, for about two and a half years. We had become very good friends, we talked by phone and by instant messenger online, and we had been sending each other mix tapes of music on cassette, movies on VHS, and lots of care packages and sweet cards, me living in NJ and him living in Clearwater, Florida. We were very flirty with each other, and clearly there was something between us that was more than just friendship, but up until then, neither of us had the courage to label it or name it.

Then 9/11 happened, and Don was working his job as a paramedic that day in Florida , and I was on my way to work on Long Island, which had me passing right through the middle of Manhattan via bus and train. Don had never been to NYC. He didnt know the layout. He didnt know if I was 27 blocks away from the World Trade Center, or 2 blocks. He had my cell phone number, and that was it. He didnt know anyone else in my life, and not many of my friends knew about him yet because at that point he didnt seem real to me and I was hesitant to tell people about this incredibly sweet person I had met by accident in a 1980s-themed music chat room. When he tried calling me over and over and over, the cell towers were overworked or down or compromised, and calls werent going through for a day or two after the attacks on most peoples cell phones. I think it was either the next day or the day after that when I finally got hold of someone’s landline to give him a call and let him know I was okay. I could tell he was crying when he heard my voice. He sighed with relief and said: “I thought you were dead. I didnt know who to call or what to do. I don’t ever want to worry about you in that way ever again. I dont want to feel powerless and like I cant be there to protect you. We need to meet in person so we can decide what we are and what this is, and so I can move out there to be with you. It’s time.”

And so we did. We made plans for him to fly to New York, and stay for a week, and see what happened. What happened is that we fell in love, and lived happily ever after as a married couple for 4 years and 9 months, until his sudden death.

The idea of one of us not being okay or dying, and the other one being powerless to stop it all the way in another state, was what catapulted our relationship to go from two people talking on the internet into moving in together and starting our life.

Im so thankful for the short time we had together, and for the love we shared and will always share. These days, when my instinct is taking me in a direction that feels right, I dont waste much time staying in nuetral. I move toward that thing or that person or that dream that is calling out to me both loudly and softly. I follow that voice. I follow that breeze, and I allow it to carry me home. 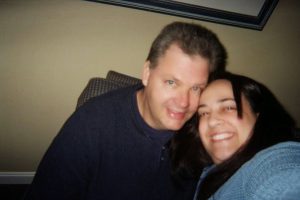